The chord chart can be an essential tool for any musician, gigging or not. They allow you to get a lot more accomplished in a lot less time with your fellow musicians. In this episode, we're going to keep it simple but we're going to cover the three common types of chord charts. Get ready to learn about the lead sheet, the standard chord chart and the Nashville number system.

The following examples will correspond with our recording of "Angel Band", during this episode. This occurs around 24:10

-The melody is given in standard notation at the top of the page.

-The chords will hover above the melody at the appropriate changes.

-The 1st verse and chorus are given, with chords and in stanza form, beneath the notation.

-The remainder of the song is given, in stanza form, showing when and where the chorus comes in. The above scan was taken from

-No melody is given. The main focus, is structure and the accompaniment chords.

-The chords are given, in letter form, within each bar. Unless otherwise noted, one chord in a measure indicates that this chord is played throughout the measure (see the first measure G chord). If there are two chords, each is assumed to split the measure evenly (see the second measure C and G chords).

-The verse and chorus are notated by the circled "C" and "V", in the left margin of the appropriate section.

-The double bar lines and dots indicate that this section will repeat once before moving on to the next section.

-The key difference in this chart is that the forward slash represents a beat. So, in the first measure, the G occupies the downbeat and is held for the remaining 5 slashes (or beats).

-Which ever version you prefer, you should always include the FORM

(see the bottom of the page).

In this case, the song will consist of 3 sets of VERSE and CHORUS and a repeat of the final CHORUS (VCVCVCC). -Below we have all the same elements from the previous chart: VERSE, CHORUS, TIME SIGNATURE, DOUBLE LINES AND DOTS and FORM.

-The key difference is that we have converted our "letter chords", from above, to the

ROMAN NUMERAL ANALYSIS of this song. Now we can play it in ANY KEY!!!

-To include our rhythm indicators (see the slashes in ANGEL BAND-2), I jotted them above each measure on the first line. 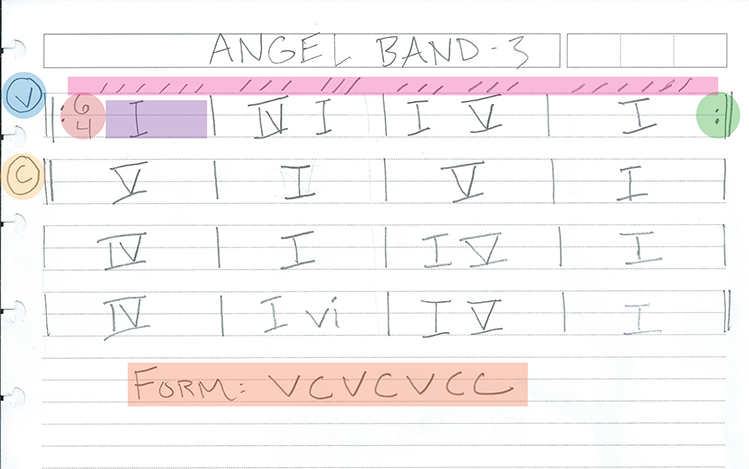 -Below we have most of the same elements from the previous chart: VERSE, CHORUS, DOUBLE LINES AND DOTS and FORM. However, there is no given TIME SIGNATURE.

-The key difference is that we have converted our ROMAN NUMERAL ANALYSIS (from above) into regular numbers. Now we can play it in ANY KEY!!!

-Another difference is that we have no bars or measure in between the chords. If a number stands alone (like the very first 1 chord) it will occupy an entire measure. If two numbers are underlined together (see the 14 chords that follow), they will share the measure evenly. In this example, that means 3 beats per chord.

-Notice the "6-" in the bottom line. This "dash" or "minus sign" is given to indicate this as a MINOR chord. As we know by now, Em is the 6 chord in the key of G major.

-This example includes no FIGURED BASS. However, it is also used in the Nashville Number System. Again, we use "regular" numbers. 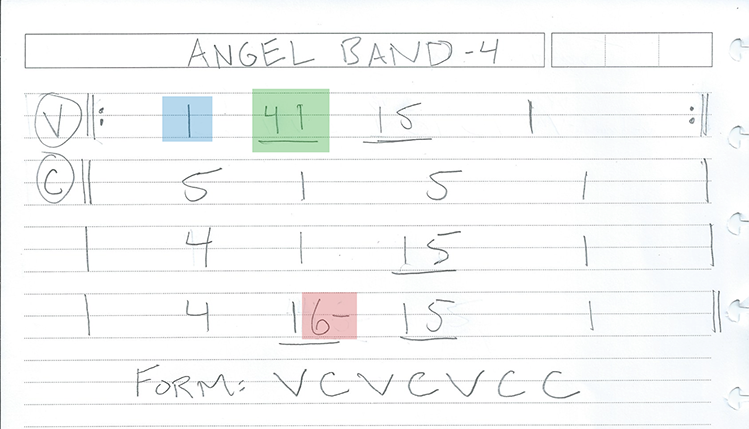 (in case my handwriting is illegible)

DIAMOND- Let the chord ring out.

MARCATO- Choke or mute the chord.

CAROT (<)- Play the chord a little before the downbeat of the measure it occupies.

CAROT (>)- Play the chord a little after the downbeat of the measure it occupies.

DASH- This will indicated a chord to be MINOR.

TRIANGLE- This symbol indicates a chord to have a MAJOR 7 quality.

FERMATTA- This indicates a pause, usually at the end of a section or piece.

For a look at "How To Write a Chord Chart on the Fly", by Aimme Nolte Music, CLICK HERE.

For a look at "Nashville Number System: An Introduction", by Six String Country, CLICK HERE

-Knowing how to make and read chord charts can boost your efficiency at practice and rehearsals. This skill set can also be utilized as a source of income.

-If you can covert the chords into numbers, and know your keys, you can play the song in any key.

-You can also use this "number" approach in the Nashville Number System.

-Chord charts are not exact instructions, rather frameworks that leave room for interpretation and improvisation.