At this point, we've discussed the two most common diatonic 7th chords: V7 and II7. Now, we will discuss "The Others". These are the VII7, IV7, VI7, I7 and III7 chords.

We will take a little time with each of these, give them a listen, discuss the way they sound and briefly discuss their functionality. Just because these are a little less common, that's no reason to not bring them up because they are often featured in great music! The voice leading considerations for the 7th chords are the same as they are for their complimentary DIATONIC TRIADS.

-The 7th of the chord must resolve down a step. Review the examples above and

-Because there are 4 chord members to the 7th chord, there is rarely a need for

doubling in 4 part textures. If you decide to double a chord member, don't make it

the LEADING TONE of the scale. Otherwise, you may be subject to parallel

-If you decide to omit a chord member, the 5th is your best bet. The ROOT gives you

the chord name and function. The 3rd gives the chord it's quality (major or minor).

And, of  coarse, without the 7th, it would cease to be a 7th chord.

-The same rules apply to the inversions of these chords.

-In jazz and pop music, these rules aren't as widely observed. In the7th chords aren't

considered as dissonant as they are in classical music.

In MAJOR keys (we'll use C major) the VII7 chord is a HALF DIMINISHED SEVENTH chord.

There are no accidentals or foreign notes, so this chord is DIATONIC.

In MINOR keys (we'll use C minor) the VII7 chord is a MAJOR MINOR 7 chord. 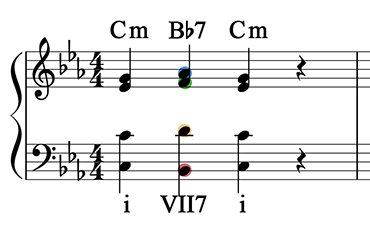 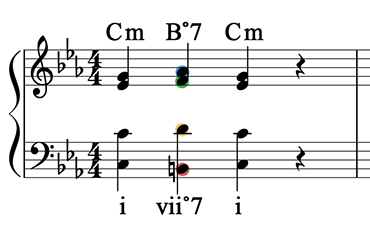 Like the IV triad, the IV7 chord takes on different qualities in different keys.

In MAJOR keys the IV7 chord is a MAJOR SEVENTH chord.

In MINOR keys the IV7 chord is a MINOR SEVENTH chord.

-The SUBDOMINANT (IV) chord, like the triad, wants to go to V or vii•.

It will sometimes pass through a II first.

In MAJOR keys the VI7 chord is a MINOR 7 chord.

In MINOR keys the VI7 chord is a MAJOR 7 chord.

-The SUBMEDIANT 7th chord (VI7), like the triad, wants to go to a PREDOMINANT chord, such as II or IV.

In MAJOR keys the I7 chord is a MAJOR 7 chord.

In MINOR keys the I7 chord is a MINOR 7 chord.

-Like the I triad, the I7 chord can go virtually anywhere, but tends to go to IV, II or VI.

-Adding that 7th to a I chord robs it of it’s stability a bit. The TONIC flavor is marred somewhat. This is not a problem in jazz or pop music.

In MAJOR keys the III7 chord is a MINOR 7 chord.

In MINOR keys the III7 chord is a MAJOR 7 chord.

-The MEDIANT wants to go to a PREDOMINANT or back to the TONIC.

-Sometime it will act as a substitution for I. Or it may move to and from I, in succession.

-It will often to go to VI, but will sometimes move to IV fairly smoothly.

-The 7th chord QUALITY is inconsequential to the FUNCTION of the chord. These chords want to move in the same directions as do their DIATONIC TRIAD counterparts.

-The same voice leading rules apply to the 7th chords as do their TRIAD counterparts, in harmonic progression.

-The FULLY DIMINISHED 7th chord is said to be INTERVALLIC or SYMMETRICAL. This chord consists of four MINOR 3rd intervals and land on the ROOT. 12 notes are divided, equally and symmetrically, into 4.