BUMPER MUSIC- "The Individual and Their Society"

You may be familiar with notes, key signatures and meter signatures. But, there's a lot more happening on a music score. Various markings, such as crescendo, forte, fortissimo and pianissimo, can tell a musician how hard or soft to play. While other expressions, such as adagio, andante and presto, will tell them how fast or slow to play. Get ready to brush up on your Italian and learn all about dynamic, perfomance and tempo markings.

THE FOLLOWING EXAMPLES WILL BE LISTED FROM SOFTEST TO LOUDEST.  THOUGH THESE EXAMPLES BEGIN WITH "PPP" AND END WITH "FFF", THERE ARE MORE EXTREME MARKINGS (SUCH AS "PPPPPP" AND "FFFFFF") THAT OCCUR IN MUSICAL SCORES.

Growing louder over time, this action will be represented by the HAIRPIN symbol, on the left, and sometimes this will be spelled or abbreviated, as shown on the right.

Growing softer over time, this action is displayed similarly to the CRESCENDO, with the HAIRPIN facing the opposite direction. It is also referred to as the DECRESCENDO.

The ACCENT will appear over, or under, a note that needs to be stressed, or played louder than the others around it. Below you will see the ACCENT symbol beneath A on beat 1, measure 1.

(the first note of the A minor scale).

The SFORZANDO (translated as "suddenly with force") will have a heavy initial attack (like a bee sting) that eases off directly after. 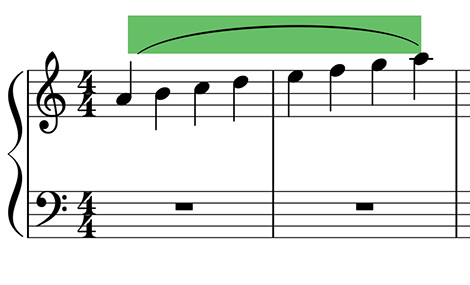 This occurs when a passage of music gradually increases in tempo. Below, we see that our tempo begins at 80bpm. The ACCELERANDO that occurs over the next four measures will land us at 100bpm by the time we arrive at measure 5.

This occurs when a passage of music gradually decreases in tempo. Below, we see that our tempo begins at 120bpm. The RITARDANDO that occurs over the next four measures will land us at 100bpm by the time we arrive at measure 5.

In the below version of this melody, we see the RUBATO. This tells the performer to keep the tempo fairly "loose" as if improvising, but still within the neighborhood of the given tempo.

-In music notation, there are a great number of symbols and markings that let the musician know just how to perform. This is one advantage notation has over tablature.

-There is a good deal of crossover between the Italian based tempo markings. For example, LARGO runs from 40-60 bpm. However, the slightly faster LENTO runs from 45-60bpm. So there's a bit of "looseness" implied by this overlap.

"The Individual and Their Society"