Follow along as we delve into enharmonic spellings and reinterpretation and the various reasons why they are necessary. We will also demonstrate some great ways to use these reinterpretations for some snappy modulations to far away places! -In the case of ENHARMONIC REINTERPRETATION, we will recognize one chord as another in a different key. 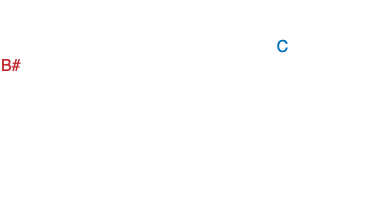 There are four chords that can be enharmonically reinterpreted in different keys. The listener might actually hear these reinterpretations when they land in a different place than expected.

1- The MAJOR-MINOR SEVENTH can be reinterpreted as a V7 or as a Ger+6, as demonstrated.

2- The FULLY DIMINISHED SEVENTH CHORD can be reinterpreted as a LEADING TONE chord with any of the other 3 chord members as the root.

-In ENHARMONIC MODULATION, the common chord is reinterpreted enharmonically to better fit the new key. In this case, the spelling is not important. But the common chord should actually be sonically recognized as a sensible chord in both keys.

-As seen earlier, the V7 chord can be reinterpreted as the Ger+6 chord in the new key. Below we have a

-While the DIMINISHED 7th chord can go to 4 different places, using any chord tone as a leading tone, it is not as commonly used as the previously mentioned MAJOR MINOR 7TH chord. Below, we are modulating to F# major from C major by reinterpreting the viiº7 chord, in first inversion, of the old key to viiº7 in the new key.