We've familiarized ourselves with the building blocks of a form, such as motives, phrases and periods. We have delved into small forms, such as binary and ternary. Now it's time to think a little bigger. It's time to talk about the sonata form and it's basic elements: the exposition, the development and the racapitulation.

The EXPOSITION consists of:

1-The PRIMARY THEME (P1) holds the main theme and key of the piece. Often it will follow an INTRODUCTION. This theme will move into the TRANSITION.

3-The SECONDARY THEME is in a new key. Often it will be the V of a major key or in the III of a minor key.

-Fragmentation- Breaking down the components of the main themes and reusing them in a different fashion or order.

-Sequence on the Circle of Fifths- Creating melodies and harmonies, from the original themes, that follow the circle of fifths sequence.

Thematic Compression or Expansion- Shortening or elongating the lengths of the themes and the notes within them.

Variation- We may play a theme in a new key or with new textures. Sometimes this involves meter or tempo changes.

Reharmonization- Maintaining the original melodies of the themes but using different chords underneath.

-At the end of the DEVELOPMENT, there is a RETRANSITION. This is where we move from our foreign key back to that of the PRIMARY THEME. It will also often involve a "prolongation" of the DOMINANT chord. This will segue to the RECAPITULATION.

-This sonata begins with a slow INTRODUCTION. This is where we establish our home key (Am)

-On m.28 the TRANSITION will begin a MODULATION to the SECONDARY THEME

-On m.52 our DEVELOPMENT begins and works it's way to E minor. We will see and hear some elements from the INTRODUCTION and the PRIMARY THEME.

-On m.96, we will hear the RETRANSITION. It will involve some material from the SECONDARY THEME (showing as ORANGE. We use this RETRANSITION to move back towards the original key of the PRIMARY THEME (A minor).

-On m.96, we will hear the RETRANSITION. It will involve some material from the SECONDARY THEME (showing as ORANGE).

-On m.111, we begin the RECAPITULATION. The PRIMARY THEME is just as it was in the EXPOSITION. On m.135 we begin the SECONDARY THEME. This theme is now in A major. 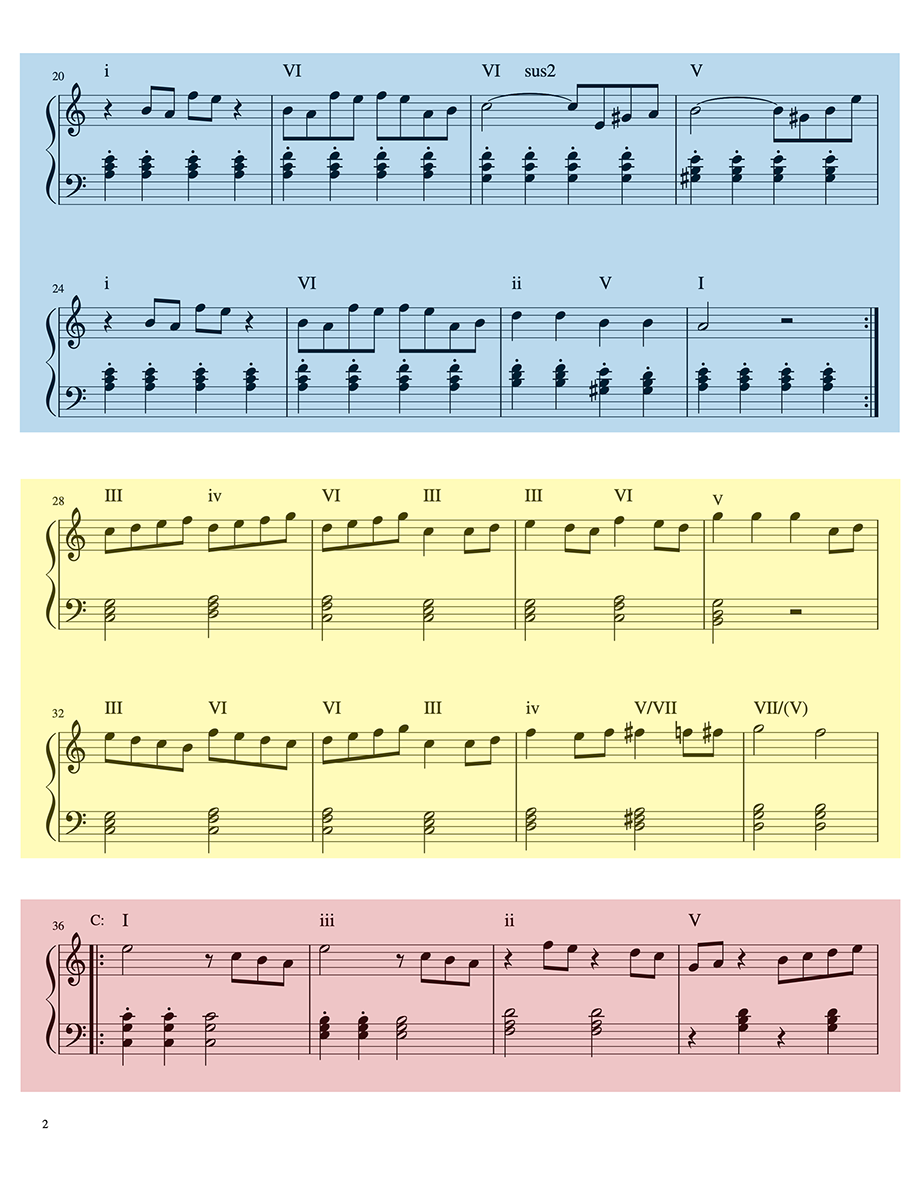 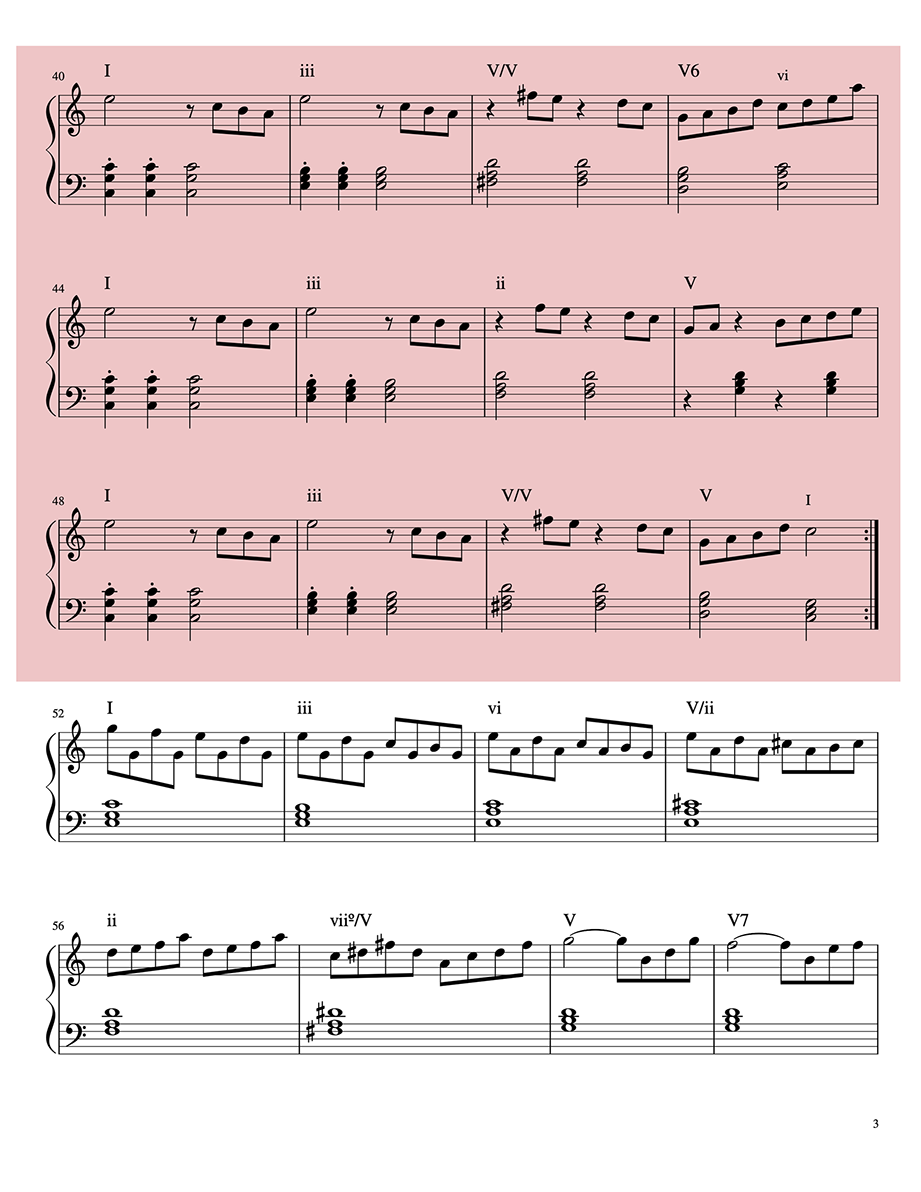 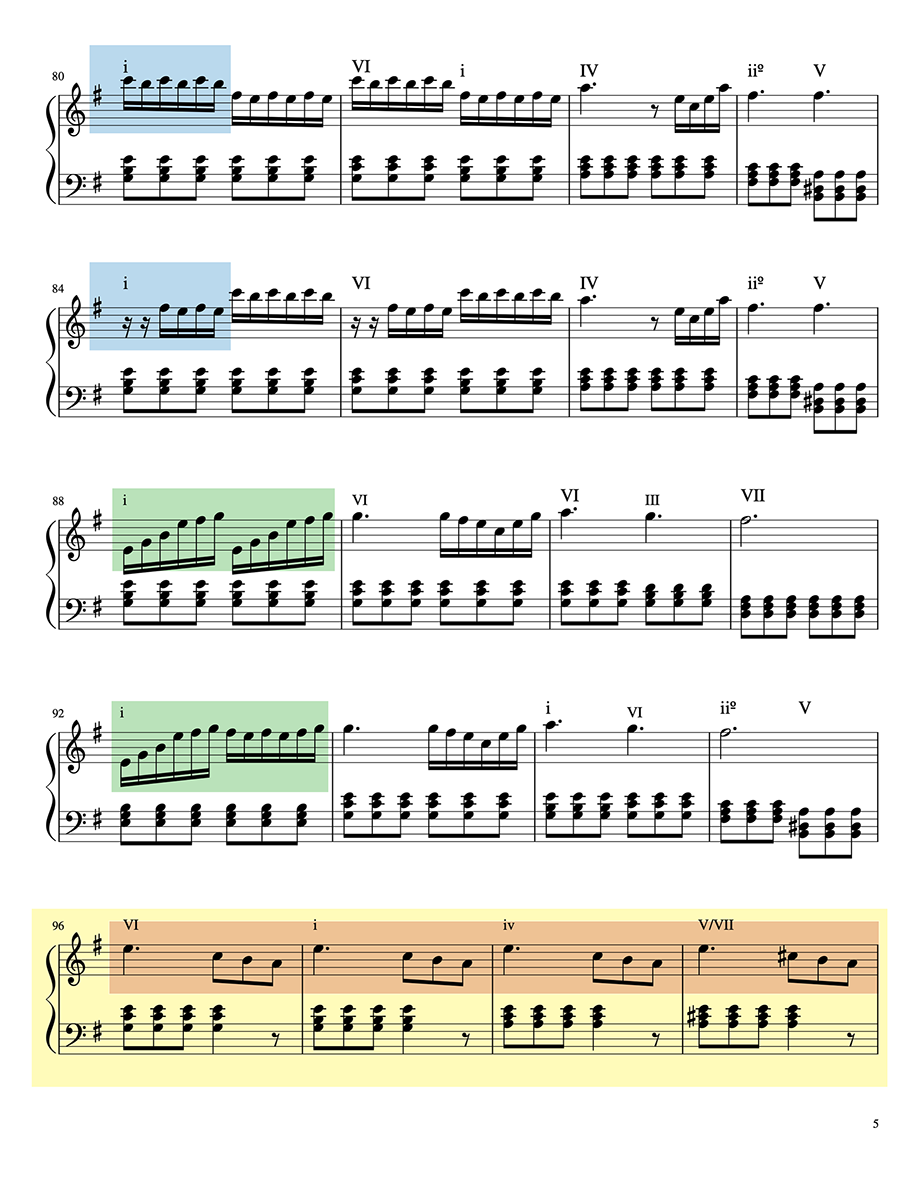 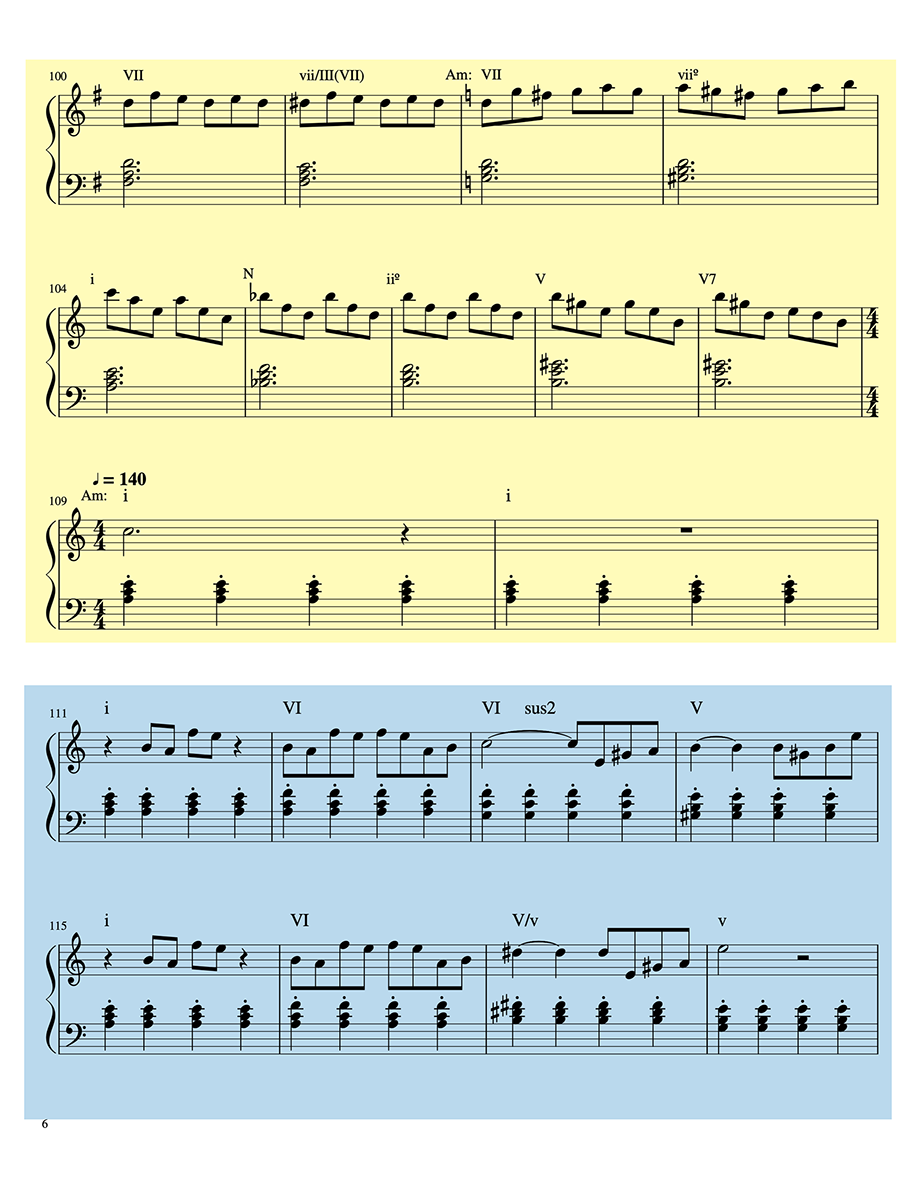 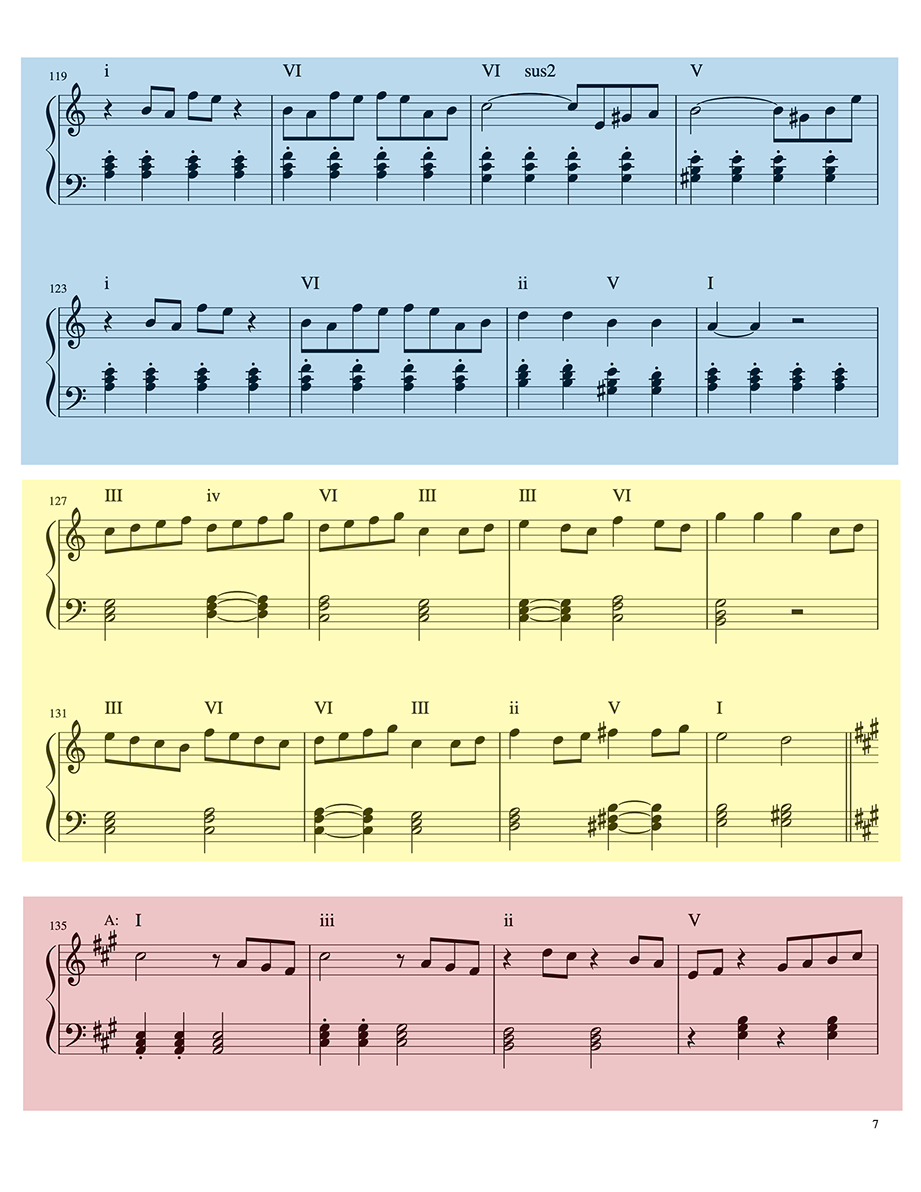 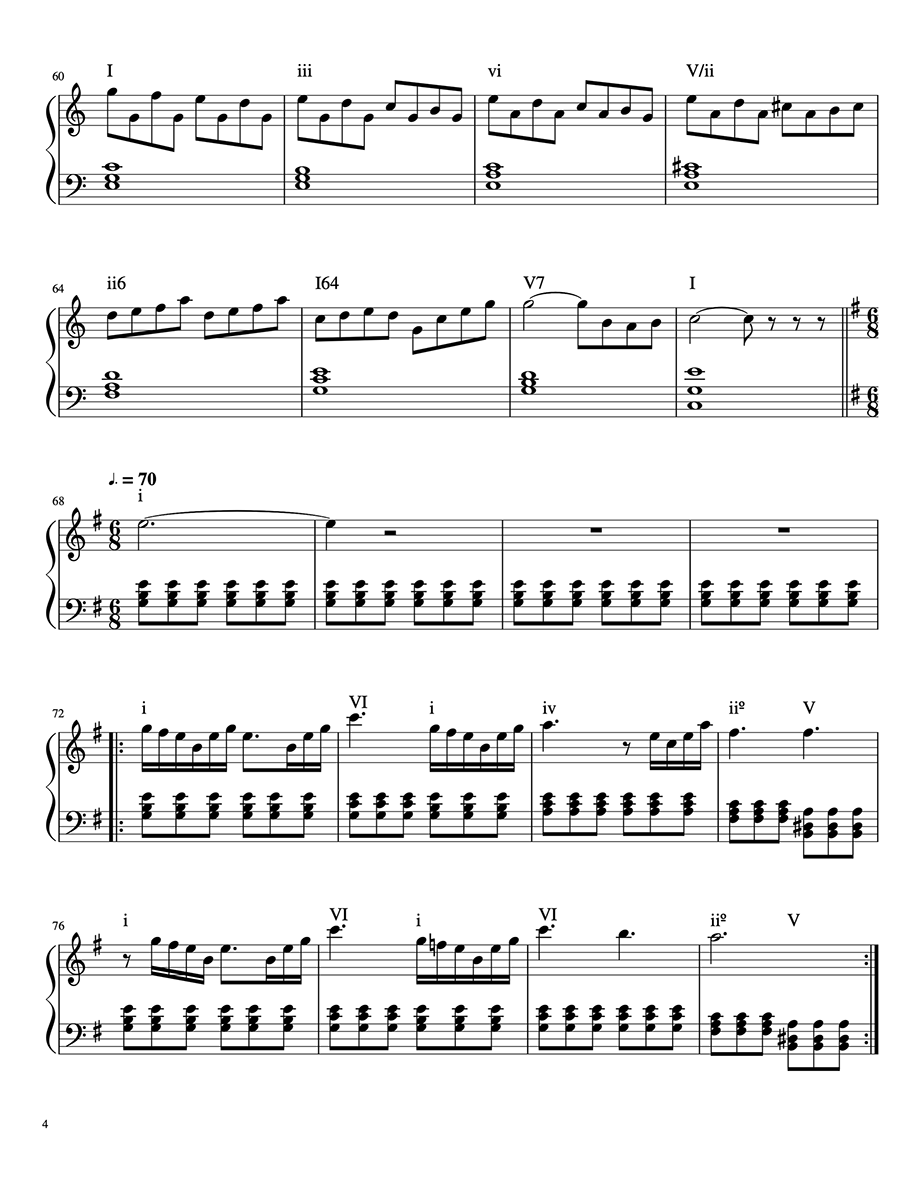 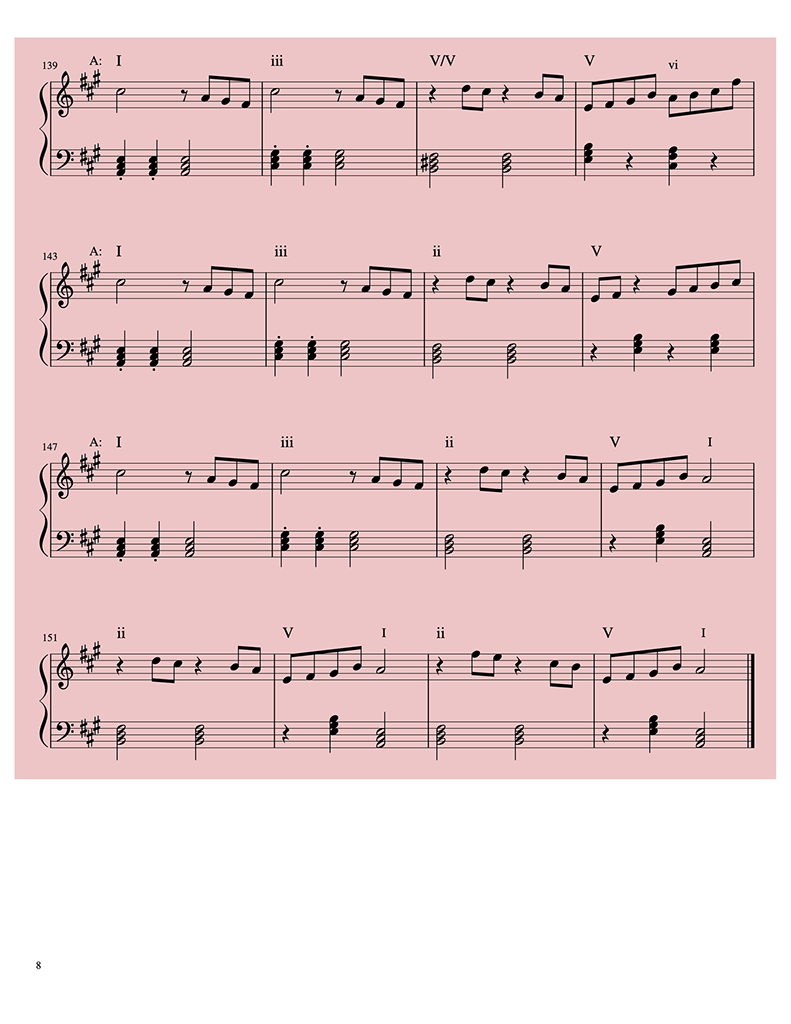