BUMPER MUSIC- "Who Wrote The Book Of Wonder" (Area 47 Music)

Continuing where episode 43 left off, this episode will review the previously discussed chords: I, II7, III, IV, V, VI and VII (in major and minor) and their inversions. We will now add some secondary dominants:

(V/V, V/II). Listen for the chord qualities (major, minor, dominant 7th, minor 7th and diminished) and use your theory brain to find out how to decipher chord progressions. 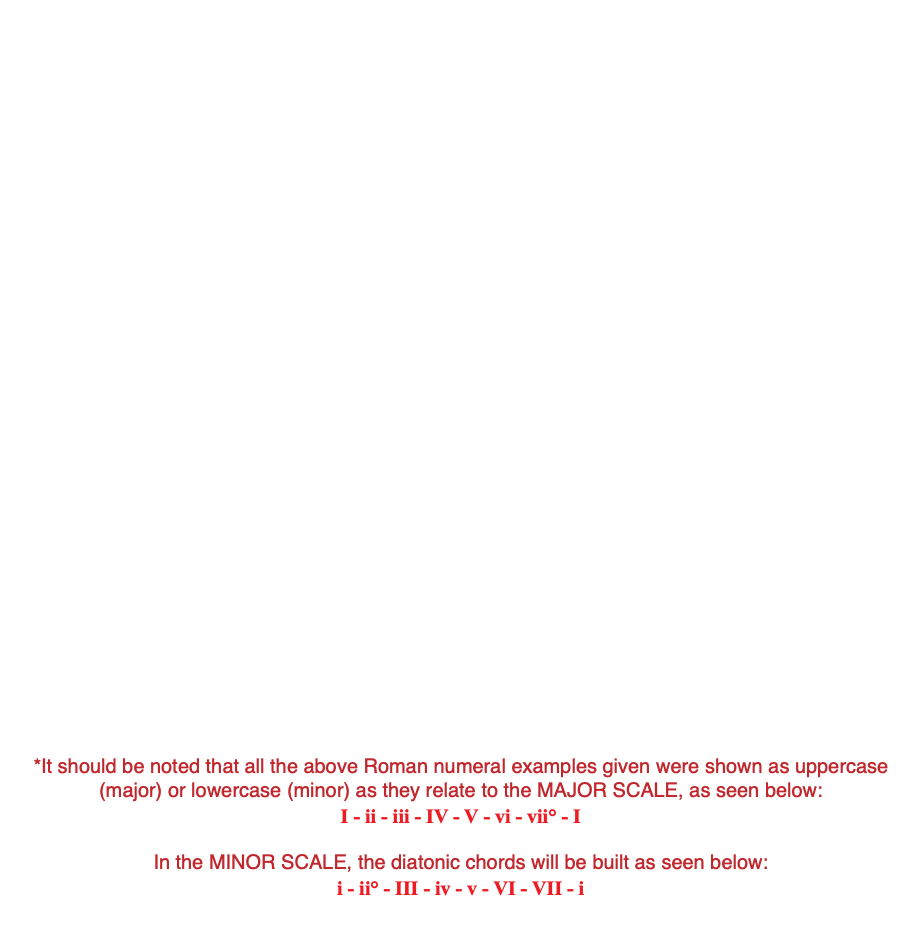 -This chord is built on scale degree 2.

-In the key of G major, the ii chord is normally a MINOR chord (Am).

-However, below, we can see that this chord has been altered (C is now C#). The Am chord, diatonic to

(also a DOMINANT chord). So it is considered the V of V.

-This chord is built on scale degree 6.

-In the key of G major, the vi chord is normally a MINOR chord (Em).

-However, below, we can see that this chord has been altered (G is now G#). The Em chord,

diatonic to the key, is now an E7 chord.

(the ii chord). So it is considered the V of ii. -2nd CHORD- Has the A note (scale degree 2) in both voices. That doesn't tell our eyes that much. But listen! It doesn't sound like a MINOR chord (normally the ii or vi chord in a MAJOR key). So we can rule out ii and vi. It has a pull toward the following chord and therefore a DOMINANT function. Let's call it V and see what it resolves to.

-3rd CHORD- Has two notes from the tonic chord (G and B) and sounds like a major chord. Let's call it I. Because the 3rd was in the BASS, we will call it a I chord in 1st inversion (I6). This also confirms the function of the previous chord.

-4th CHORD- Includes the G note (tonic) and C# (foreign from the G major scale). Something funny is happening. This also sounds like a DOMINANT 7 chord but neither of these notes are in the D7 chord (D F# A C). We know it is a V of something. Let's see where it goes.

-5th CHORD- Has two notes from the DOMINANT chord (D and F#) and sounds like a major chord. The 5th is in the bass. Let's call it V. This confirms the previous chords function to be V/V.

-6th CHORD- Has two notes from the tonic chord and sounds like a major chord. The tonic is in the bass as well. Let's call it I. This also confirms the previous chord to be a V.