Some times you will encounter notes that don't belong to the chords they are sounding over. These notes are just what they sound like, nonchord tones! In this episode, we will discover the main types of nonchord tones: the passing tone, the neighbor tone, the escape tone, the appoggiatura,

the suspension, the anticipation, the retardation and the pedal tone. NOTE: Most NCT's occur on a weak, or unaccented, beat. However, they can (and will) occur on a strong beat in some instances.

The PASSING TONE is a nonchord tone that fills in the space between two chord tones (often a 3rd apart). It is approached and left, by step, in the same direction. Below, we see the first chord

(in beat 1) is an implied D major, with the notes (D, D, A). The octave D notes in the bass clef hold throughout. Therefore, on beat 2, we have the notes: D, D, G. That G note does not belong to the D major chord. It is only passing through to get to that F#. It is referred to, thusly, as the PASSING TONE. The PASSING TONE below is a DESCENDING PASSING TONE.

In the next example, that same G note becomes an ASCENDING PASSING TONE because it approaches from the F# below.

The DOUBLE PASSING TONE is also very common. As the name implies, this is when passing tones occurs simultaneously in 2 different voices as seen below.

The previously mentioned PT's are all referred to as a DIATONIC PASSING TONES because they belong to the key of D major.

However, the CHROMATIC PASSING TONE involves notes that are foreign to the key.  Below, we see a G# in the 2nd beat of the highest voice moving from the A (in beat 1) to the G (in beat 3).

The DOUBLE PASSING TONE occurs when 2 NCT's fill the space between 2 chord tones.

The ACCENTED PASSING TONE is named as such because it is so rare.

Unlike most other PASSING TONES, it lands on the DOWN BEAT .

The NEIGHBOR NOTE leaves a note and returns back to the same note.

LOWER NEIGHBORS are approached from and return to a chord tone above.

This E, for example, preceded by and followed by an F note.

Like all NCT's the NEIGHBOR TONES can be either DIATONIC or CHROMATIC. 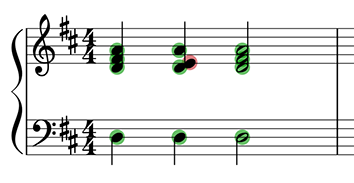 INCOMPLETE NEIGHBORS do NOT return back to the original chord tone. There are 2 types:

the ESCAPE TONE and the APPOGGIATURA.

The ESCAPE TONE is approached by a STEP and left by a LEAP.

The APPOGGIATURA is approached by a LEAP and left by a STEP.

The ANTICIPATION is a note that belongs to the chord to follow. It is approached by step and resolves to the same note when the chord lands. In beat 1, we see a root position D major chord.

In beat 2, we see where the previous A note has moved to the G note. This note belongs not to the D major from beat 1 but the the G major chord that follows in beat 3. It therefore stays where it is and ANTICIPATES the coming chord in beat 3.

The SUSPENSION holds a note from the previous chord while all the others move to the following chord. Then it is resolved DOWN BY STEP on a weak beat of the new chord.

bass note of the given chord.

(we will use this 4-3 SUSPENSION as an example)

1-PREPARATION: The 1st chord (shown in beat 1 below) is a 4-part, root position D major chord.

2-SUSPENSION: In beat 2, the D note (in the tenor voice) is SUSPENDED from the previous chord. It is now a NONCHORD TONE in its new chord (A7).

3-RESOLUTION: In beat 3, the D note (from beat 2) has now dropped down the

Here are the primary types of suspensions.

The above 6-5 SUSPENSION is considered a CONSONANT suspension because it involves the fairly consonant M6 interval resolving down the perfectly consonant P5.

The rarely encountered RETARDATION is a SUSPENSION that resolves

UPWARD to a LARGER INTERVAL, as shown below.

A PEDAL TONE, or PEDAL POINT, is sustained throughout a passage of harmonic progression. Chords change but this one note remains present throughout. It is usually the TONIC or DOMINANT. Below, in the first measure, the melody outlines a D minor chord (of which D is a member). In the following measure, we have the A major chord (of which D is not a member) but the D remains. It is now a NONCHORD TONE.

-NONCHORD TONES (NCT's) can spice up a harmonic progression by adding tension and release between and during harmonic motions.

-Most NCT's occur on a WEAK  BEAT, but not always.

-SUSPENSIONS refer to an interval resolving down to a lower interval.

-RETARDATIONS do the opposite of SUSPENSIONS. They resolve up to a higher interval.