When writing a song or a piece of music, it's good to know how certain chords and harmonies work together. An understanding of the circle of fifths can make this fairly simple. In this episode we will follow the circle all the way through and hit every chord on the way. It's time to apply a level of understanding to something that seems like a magical musical diagram at first glance.

Perk up your ears and step inside the circle!

THE CIRCLE OF FIFTHS- This is essentially a diagram based on the relationships of all 12 tones and how they work together. It also typically represents all of the key signatures and their numbers of sharps and flats.

THE CIRCLE OF FIFTHS

We can use the right side of the diagram below to see where each of the following chords fall in order of function. Each one, going clockwise, is a fifth above the one before it. Because we are in C major, we will put C (the tonic) at the top of the circle. In the yellow ring, you will see the number of SHARPS or FLATS in the keys provided. In the green ring, going clockwise, you will see the notes of the keys in the order of 5ths. In the green ring, going counter clockwise, you will see the the notes of keys in the order of 4ths.In the blue ring, the relative minor keys are provided for the given number of sharps or flats. Each new key signature, going CLOCKWISE from C, gains a new SHARP as we move along the circle. If we apply ROMAN NUMERALS to these chords, as we move CLOCK WISE along the circle and starting from C MAJOR (as I), the pattern will look like this:

If we reverse this order, we will have the ever pleasing CIRCLE OF FIFTHS PROGRESSION. It will look like this:

-The I chord is said to have TONIC function. It is in it's final resting place. It has arrived at "home base" and needs not move further. It could but it doesn't need to and would require energy to do so.

-The V chord and the vii° chord are said to have a  DOMINANT function. These types of chords are very uncomfortable and want to resolve to the TONIC, the I chord.

-The ii, iii, vi and the iv chords are said to have a PREDOMINANT function. These chords desire to move to the DOMINANT, the V chord.

-The iii and the vi can sometimes take the place of the TONIC. This suggests a TONIC function but doesn't have the same resolve as a I chord might. When a V chord or another DOMINANT chord resovles to a vi chord, it is considered a DECEPTIVE CADENCE.

-The chord progressions based on the circle of fifths can be very rich and fulfilling. You can use these as a road map towards making your own compositions more interesting and pleasing.

If you were to follow this circle COUNTER CLOCKWISE, you would be following the CIRCLE OF FOURTHS. Now each new key signatures gains a new FLAT.

-Even though the above example portrays C to be the tonal center, or the TONIC, you could put any key at the 12 o'clock position and the same pattern will hold. 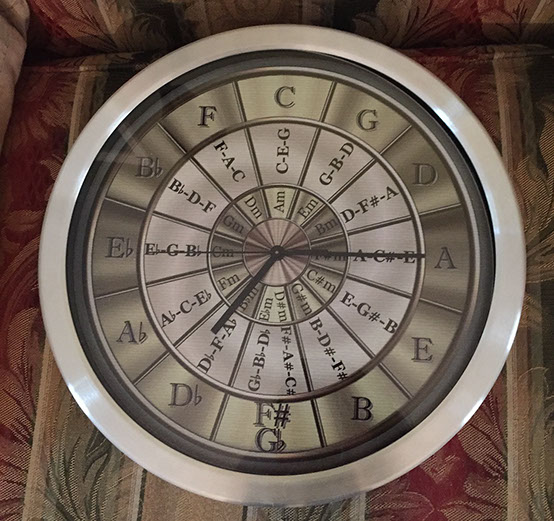 "Step Inside The Circle"