MIDI is one of the greatest things to happen to music and those who work with it. This music based language allows for the entry and edit of musical notes and their attributes. It also allows for the synchronization and communication between musical instruments, machines and computers. It can be a vital aid in composition and can expedite your musical work flow to a considerable measure. Learn about its origin, its language and its many uses!

A technical standard, established in the early 1980's, that allows for the interface, synchronization and communication between musical instruments and computers. It is also a language for the entry and edit of musical ideas and information.

PATCH- The instrument chosen to perform your programmed music.

EVENT- Any occurrence that results from programming or playing via the MIDI language. It could be an actual note or any articulation there of.

SYNTHESIZE- To create sounds by combining and manipulating raw sound waves, such as sine waves and square waves.

SAMPLE- To record an instrument for use as a MIDI patch. These recordings are stored on your computer's hard drive and accessed when referenced within the MIDI code.

QUANTIZE- To correct for time. You can quantize a note that you entered to be 100% on the beat or you can make it a little looser and randomized.

CHANNEL- A path through which the signal of an instrument is routed.

What MIDI Can Do

-Allow for the entry and editing of musical information via piano keyboard or computer keyboard.

-Translate your recorded musical data entry into notation and vice-versa. It doesn't matter what sequencing software, or what notation software, you use. This info will be transferable among all MIDI compatible software (basically, all music software).

-MIDI time code can be used to synchronize the clocks and tempos among any two or more MIDI based machines.

-QUANTIZE, or correct (for time) the rhythmic accuracy of a recorded musical performance.

(not to be confused with programmable controller commands, which generate and articulate MIDI events)

This is where it all begins! You can use the controller, or instrument, to enter musical data. Below, a piano keyboard is shown. But these controllers can come in many forms, based on all the different instruments (drums, guitars, wind, etc.). Even if you don't own a MIDI controller, you can still program this data via you computer keyboard.

On the back of this keyboard, there will be a panel of MIDI jacks that may look

The chart below outlines the functions of these connections. 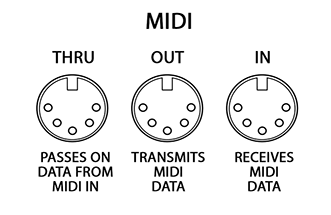 You will go from the OUT port of your MIDI controller into another MIDI machine or into the INTERFACE. Originally, this was done (and still is in some cases) via the MIDI cable.

The original MIDI cable was a 5 pin cable:

Now MIDI data can be transferred directly via USB, Firewire, wireless, Bluetooth, etc. In these cases, you can simply go straight into your computer via USB. In other cases, you will need an INTERFACE.

The INTERFACE, such as this one below, will connect your MIDI device (or devices) to your computer. See the IN, OUT and THRU ports on the front. On the back panel, there is a USB out port. Once everything is hooked up properly, you can record your music using a MIDI friendly software application. The notes, or EVENTS, you enter may look something like this. Each of the notes are represented by these thick, light blue lines.

In this particular application, Pro Tools 12, the volume of these notes are indicated by the shade of the notes. The darker notes will play back louder and the lighter ones will play back softer. On the bottom of the screen shot below, see the vertical lines with the diamonds on top. You can adjust the individual VOLUMES of each note by moving these 'diamond heads' up, for more volume, and down, for less. Any adjustment that is made will be stored in the programming as a MIDI EVENT.

(not to be confused with instrument controllers, such as keyboards,

which are used to enter MIDI data)

The coding of these events involves commands that are referred to as CONTROLLERS. Each controller command has a specific function, based on the many ways you can articulate a note. Below is a list of all the CONTROLLER COMMANDS, from 0-127.

11-Expression (sometimes routed to after touch)

This list of commands is now standardized among all MIDI compatible machines and softwares thanks to GENERAL MIDI (est. 1991). This standard also includes the organization of instrument sounds that are common among all MIDI machines and software. These sounds are also known as PATCHES.  In 1999 GENERAL MIDI 2 was established. This mainly allowed for more PATCHES, CONTROLLERS and registered parameter numbers.

Each of these PATCHES can be individually routed through its own designated CHANNEL.

The original MIDI cable had the capacity to carry 16 CHANNELS. Not unlike a sound mixing board, each CHANNEL can have it's own instrument routed through it.  This CHANNEL is then accessed for playback and mixing.

-MIDI can be a great tool for composition, performance and notation.

-MIDI was developed in 1983 by Dave Smith, of Sequential Circuits, and Ikutaro Kakehashi, of Roland. They were able to demonstrate that 2 instruments can be made to communicate with one another by using the MIDI language.

-If you're trying to use samples to emulate real musical instruments, you must also pay close attention to the nuances that occur within the performances of these instruments.