When we INVERT an interval, we change the arrangement of its pitches.

Below, in measure 1, we see a D note on the bottom and an F on top.

This is the interval of a minor 3rd (m3). In measure 2, we see that the D has been moved up an octave to the space of the D note above the F. So, the first interval (m3) has now been

INVERTED to that of a major sixth (M6).

When we invert PERFECT intervals, they remain perfect.  Below, we see a D note on the bottom and an A note on the top in the first measure. This is a PERFECT 5th. When we invert the two notes, as in the following measure, the interval becomes that of a PERFECT 4th.

The same would occur with a PERFECT OCTAVE and UNISON.

In music theory, we study inversions to more fully understand the the relationships between two notes. In music practice, we might use them to add more color and interest to a passage of music or to widen the texture of a chord.

WILL EQUAL THE NUMBER 9.

When we invert TRIADS, we have 2 possible inversions from the original

When we invert 7th chords, we have 3 possible inversions from the original ROOT POSITION.

Below, we have a C major minor 7th chord (C Dominant 7th) in root position in the first measure.

Each of the following measures display the inversions that follow, in order, from the root up.

In the Baroque era, FIGURED BASS was used as a harmonic guideline for the accompanying keyboardist. These symbols would lay beneath a given melody and give the accompanist an idea of which harmonies to play along with it. 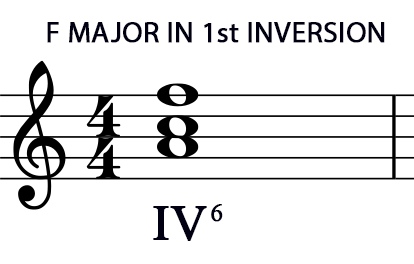 The superscript 6 suggests that the highest harmony is that of a 6th and the next lowest would be a 3rd. At some point the 3 was dropped from the symbolbecause it is more or less implied. Below we see the FIGURED BASS symbols for the 7th CHORD. In this case, we are in the key of

F major and the C7 chord will be a V chord.

the 5th in the highest.